Safe and Sustainable Use of Additives

Look for the Logo

Innovation in the Pipe Industry

Process innovation yields reduced life cycle impacts of products: Background
Biaxially oriented PVC, or PVC-O pipe, is produced by stretching unplasticised PVC (PVC-U), in both the axial and tangential direction during manufacturing, a process resulting in the polymer chains being oriented into the direction of load instead of randomly distributed. This provides PVC-O with a number of technical advantages compared to other materials, especially when used for pressure pipes. This feature also translates into significant environmental benefits.

The path to innovation
The technology used to produce PVC-O pipe was first developed for commercial production in the 1970s in the UK by Yorkshire Imperial Plastics. Australia was an early adopter of the process, with Vinidex Pty Ltd commencing PVC-O pipe production in 1984. The early version of the manufacturing process was slow and cumbersome, which limited production and adoption by the industry. By the 1990s, a number of companies had begun developing new processes that would significantly increase the output of PVC-O pipe, making it economically and commercially viable. Thanks to their increased efficiency, these new processes became standard procedure, and Australian companies were again on the forefront of adopting these innovations. The 2000s saw continuous improvements of the production process, enabling sizes up to diameter of 400mm to be competitively produced. The most recent developments by Molecor in Spain have pushed the boundary up to 800mm, with 1200mm now being under investigation.

Technical and environmental benefits
The biaxial distribution of the PVC polymer chain leads to significant improvement of its mechanical properties. It renders the final product more resistant to impacts, crack propagation and fatigue loading, as shown in the diagram below.

The enhanced mechanical properties of PVC-O means it is possible to reduce pipe wall thickness compared to other materials for equivalent size and pressure rating. This modification has two significant end results. First of all and most evidently, the amount of PVC compounds required per meter of pipe is reduced, with no change in performance. Additionally, for the same outside diameter, PVC-O pipes have a larger bore, which allows it to move more water, faster than any alternatives. This results in lower environmental impacts associated with the production and transportation, due to reduced weight of the pipe, as well as potential energy savings during the use phase of the pipe. Life Cycle Analysis (LCA) is a methodology used to scientifically assess the environmental impacts of a product over its entire life cycle - from cradle-to-grave.

Widely used today to assess claims of environmental benefits, it has, since its introduction, proved itself as a valid way to compare the environmental impacts of materials, services and products, with the potential of identifying hotspots and helping the user in decision making down the line. In 2009, Edge Environment, a Sydney-based LCA consulting firm, completed an LCA of Australian pipes, comparing various grades of PVC (including PVC-O), other types of plastics (PE, ABS) and other materials (cast iron, ductile iron and copper), for both pressure and non-pressure pipes. When analysing pressure pipe, the study concluded that 'PVC-O pipes performed very significantly better environmentally than all of the alternatives'. The results of the study are reported in the diagram below, and show that environmental impacts of PVC-O pipes are more than twice as low as its closest alternative. 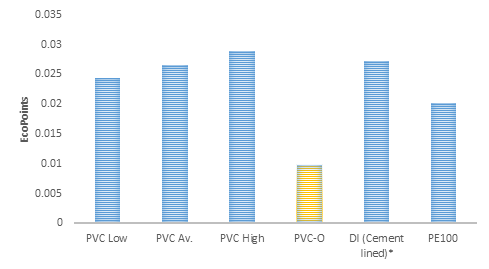 Conclusions
The introduction and development of PVC-O is a prime example of industrial innovation leading to better performances both technically and environmentally.