Plasticisers are a range of substances with varying chemistries and molecules used to make things soft and flexible. Some examples of plasticiser use are described in the table below.

Today there are around 50 plasticisers in commercial use. Globally, approximately six million tonnes of plasticisers are consumed every year, with the major use being flexible PVC applications. Plasticisers transform the physical properties of PVC as well as other polymers, creating a wide range of flexible and durable applications. Orthophthalates are the most widely consumed type of plasticiser.

What are orthophthalates?
Orthophthalates (“phthalates”) are a group of chemical plasticisers that are commonly added to PVC and other materials to make them flexible. They may be found in every day PVC products such as electrical cables, hoses and flooring, as well as life-saving medical devices including intravenous tubing and blood bags. They are also used in non-PVC industries and processes such as coatings, rubber products, adhesives and sealants.

Different phthalates for different uses
Phthalates are broadly divided into two groups – ‘high’ and ‘low’ according to their molecular weight and the number of carbon atoms in the backbone of the molecular chain. The groups have very different applications, toxicological properties, classification and legal requirements.

High molecular weight phthalates
Globally, high molecular weight (HMW) phthalates (C7-C13 carbon backbone) are recognized as being safe for use in all current applications. DINP, or diisononyl phthalate, is an example of a HMW phthalate that has been used for decades in a wide range of products such as flooring, toys and roofing membranes.

Low molecular weight phthalates
The use of low molecular weight (LMW) phthalates (C3-C6 carbon backbone) is generally restricted, with some exceptions for DEHP, or Bis(2-ethylhexyl) phthalate, in medical devices. DEHP plays a vital role in medical products such as blood bags, IV fluid bags, and providing exceptionally good flexibility to tubing to ensure efficient flow of fluids and drugs.

Human health and phthalates
After 50+ years of use, there is no empirical evidence that phthalates cause harm to human health. They are metabolised and excreted quickly and are not bio accumulative. Phthalates have become one of the most studied groups of chemicals in industrial use. Since the 1970s, they have been scrutinized to understand their potential to cause serious health impacts including endocrine disruption and cancer in humans. Two types of studies have caused concern:

Studies on rodents exposed to phthalates – Rodents exposed to high doses of LMW phthalates have demonstrated health impacts . However, the impact is not replicated in marmoset primate studies (a species thought to better reflect human metabolic pathways). DEHP exposure in marmosets has demonstrated no adverse effects, even after exposure in-utero, which suggests adverse findings of rodent studies can be considered a worst-case scenario.

Three factors are important in determining the level of risk:

While concerns have been raised about the potential impact of short term, high exposure of male foetuses and neonates to DEHP during critical medical care procedures, the benefits of the medical devices are generally considered by regulatory authorities to outweigh the risks of use.

Human exposures to the phthalates of most concern are generally thousands of times lower than the lowest adverse effect levels for these phthalates, even in the most sensitive animal species.

“…Studies in humans did not report significant adverse association between DEHP exposure and parameters of reproductive system function or development in adults or neonates.”
National Industrial Chemicals Notification and Assessment Scheme (NICNAS), Australia, 2010

“…DEHP-containing plasticized PVC devices are important for many treatments…they are justified because of the benefits of these procedures.”
Scientific Committee on Emerging and Newly Identified Health Risks (SCENIHR), Europe, 2014

Regulations on plasticiser use

HMW phthalate plasticisers
The use of the HMW (“high”) phthalates such as DINP, DIDP and DnOP, is not restricted in Australia. Comprehensive risk assessment reports on DINP, DIDP and DnOP conducted by the Australian chemical regulatory authority, NICNAS, found these phthalates safe for existing uses. In Europe, HMW phthalates are not classified and don’t require authorization for use under the region’s REACH legislation. Some jurisdictions (Europe, United States, Canada) have imposed precautionary restrictions on the use of DINP and DIDP for toys and childcare articles that can be placed in the mouth. 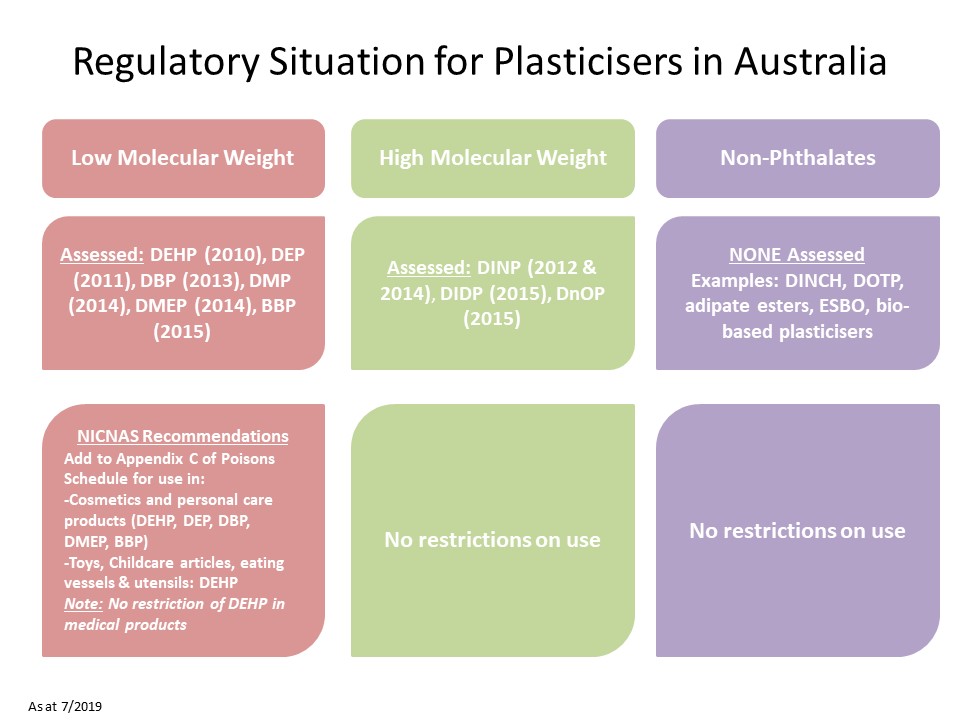 Information sources for table above: NICNAS

LMW phthalate plasticisers
DEHP is currently approved for use in medical devices across most jurisdictions. An exception is France, where its use in medical tubing for peadiatric and maternity wards has been restricted from July 2015. LMW (“low) phthalates have generally been restricted in toys, childcare articles and cosmetics for several years in the US, Canada and Europe. To date, eleven LMW phthalates classified as Category 1B reproductive agents have been identified as Substances of Very High Concern (SVHC) and placed on the REACH Candidate List. The European Union generally appears to be encouraging an orderly move to alternative plasticisers, particularly in medical devices, adding suitable alternatives to the list of allowed additives under EU Pharmacopoeia.

While there are no restrictions on the use of DEHP in Australian medical devices, it is banned in Australian cosmetic products and is limited to a concentration of 1% in children’s plastic products.

Across the United States, Canada and Europe, all agencies have stated that when considering limiting the use of DEHP in particular medical devices and/or procedures, it is important to consider benefits, as the health benefits of the medical procedures might outweigh any risks. A recent Danish study1 on the feasibility of non-phthalate alternatives has found that the technical applicability of DEHP substitutes requires further assessment to ensure patient safety and appropriate disease treatment.

Read more about LMW phthalate use in PVC medical devices.

Non-phthalate plasticisers
Regulation for non-phthalate plasticisers is relatively new as global understanding of the safety and efficacy of these alternatives develops. There are currently no restrictions on non-phthalate plasticizer use in Australia and some are already registered for use in Europe. The Scientific Committee on Emerging and Newly Identified Health Risks (SCENIHR) published the following Preliminary Opinion on the safety of medical devices containing DEHP-plasticized PVC or other plasticizers on neonates and other groups possibly at risk in September 2014: “The potential for replacement of DEHP in these products should be considered against their efficiency in the treatment, as well as the toxicological profile and leaching properties of the alternative materials. There is a strong need to develop and collect data on the toxicological profile and exposure of alternative materials.”

The future for responsible plasticiser use in Australia
Phthalate plasticisers continue to play an important, monitored and safe role in modern life. The Vinyl Council of Australia takes the community’s environmental and human health concerns seriously. We continue to advocate for sound science and the safe use of PVC products.

Our PVC Stewardship Program supports the innovation and improvement of manufacturing processes and products in our sector. The safe and sustainable use of additives is a core requirement for Program signatories. Signatories must report when they are using low phthalates and support regulatory authorities in measures that encourage the market to cease the use of low phthalate plasticisers in an application where credible scientific authorities show evidence of unacceptable health or environmental impacts.

Compliance with the Best Practice PVC verification scheme requires products to be free of low phthalates.