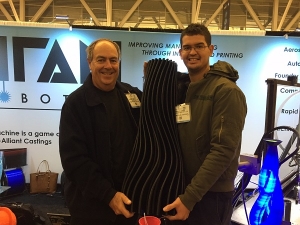 Titan Robotics had joined Chemson representatives at Rapid 3D, a 3D-printing exhibition in Pittsburgh, USA where it took three hours to print the 14kg vase. It’s a first for 3DVinyl™ in that all 3D-printing work conducted so far with vinyl, or PVC, has so far been with filament-fed machines.

Since unveiling their technological breakthrough in May 2016, Chemson Group, worldwide leaders in the PVC stabilizer additives industry, has been working on changes to the material’s thermoplastic PVC formulation. These include improvements to the Z-axis interlayer adhesion, impact resistance and thermal stability.

Speaking after the May 2017 exhibition,  Greg Harrison, Specialist for Chemson on Additive Manufacturing materials and 3DVinyl™ co-inventor comments: “We have some more formulation adjustments to do, which will shortly be completed, but overall we have demonstrated that 3DVinyl™ PVC has a place in the industrial Advanced Manufacturing world of 3D-printable polymers.”

A short video of the vase during the 3D-printing process can be seen here.

Dr J.-Dieter Klamann, MD of Chemson Pacific Pty Ltd and 3DVinyl™ co-inventor adds: “Everybody is working on the printing speed factor…but - if you look closely at the complexity of the shapes, the biggest breakthrough is that they cannot be made by any other process!”

Excited by their success, Dieter and his fellow co-inventors, Greg and Dennis Planner, 3DVinyl™ Product Manager say it ‘shows a clear way forward for the industry’.

“After this initial success of having a printable version of PVC in the form of 3DVinyl™, the international Chemson team is currently undertaking concerted efforts to adapt PVC’s well-established unique potential and versatility for applications in the 3D Printing/AM world,” says Dieter. “These new PVC products will be introduced step-by-step into the 3DP community after basic 3D printability is assessed in our rigorous pre-tests.”

Welcoming enquiries from interested parties, Dennis adds: “We hope to engage and collaborate with industry to help us further improve the current formulation within the context of industrial and product manufacturing use cases that can’t be effectively emulated in our lab and previous field testing environments.”

Chemson plans to offer 3DVinyl™ in both filament and pellet form to cover a wider array of 3D printers and applications.